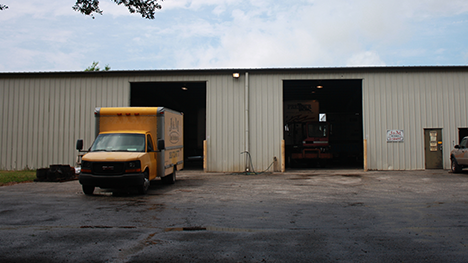 Whether you’re a driver or an owner, having a misaligned truck can cause numerous headaches. It can have so many negative effects on various components of the truck like the tires, front end, suspension system, trailer, and even mileage. Not to mention the fact that it’s incredibly inconvenient to drive a truck that’s pulling one way or the other. Add that to the dangers involved if you’re on a long haul, and you have a serious problem on your hands. Getting an alignment certainly isn’t the cheapest service out there, but it will save you a lot of money in the long run. Here are three reasons to consider an alignment now!

Number One – Irreparable Tire Damage
Tires are expensive, which is why they must be properly maintained. One of the biggest culprits of tire damage is a bad alignment. The result is always uneven wear on the shoulders of the tires, as well as feathering. While the steer tires may get the most damage, the rear tires are affected as well. It is pretty easy and quick to tell – usually within the first 25% of wear on the tire patterns will show up that spell bad news concerning your alignment.

Number Two – Lower Fuel Mileage
Misaligned tires have been shown to cost drivers at least 3% in fuel mileage, which over the course of a year, adds up to a lot of extra money.

Number Three – Avoid Damage To Other Components
The longer you go with a misaligned truck, the more damage it will cause to your suspension and steering system, forcing you to replace other parts faster than what would be normally needed. Add that on the fact that it will also have negative effects on the trailer and your tires, and you have to have an alignment now.